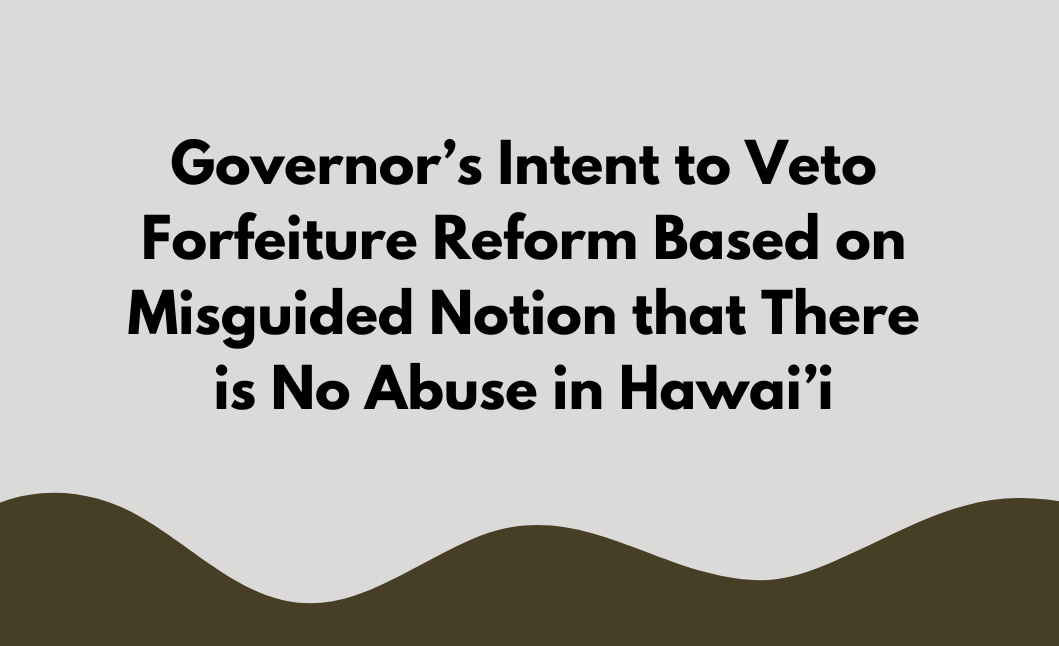 HONOLULU, HI – In an incredibly surprising and disappointing move, Governor David Ige today included HB748, a modest reform of the controversial civil asset forfeiture program, on his intent to veto list. Civil asset forfeiture allows law enforcement to seize and sell a person’s assets based on the mere suspicion that the property is connected an alleged crime (often related to drugs). This allows police, e.g. the Honolulu Police Department, to keep the money and pad their budgets outside the appropriation process. This upside-down version of due process has prompted at least 18 states to require that a criminal conviction be obtained before a forfeiture can be completed. HB748 would add Hawai’i to the growing list of states that require such a conviction. This is reason alone for the Governor to reconsider his intent to veto – it would protect against any future abuse.

At his press conference, however, the Governor also appeared convinced that there was no past abuse of forfeiture in Hawai’i, referencing an absence of mainland incidents here. Facts say otherwise. First, local media has highlighted the existence of such very incidents here as well.[1] Second, the State Auditor’s report revealed all manner of problems with the forfeiture program that the Governor should consider before issuing a veto. Those issues relate to a lack of oversight, absence of administrative rules and lack of compliance with state law regarding how to use forfeiture proceeds.[2]

Carl Bergquist, Executive Director of DPFH, said in a statement: “The conviction requirement for civil asset forfeiture in HB748 is a common sense reform adopted around the country. It is a start to revamping a forfeiture program so reviled that it has been abolished altogether in three other states. States that have added the conviction requirement have not suffered any known problems. Indeed, like California, they have found that they must then add additional reforms to protect innocent property owners from local police cooperating with the federal government in order to circumvent the reformed state law.

The notion that there is no abuse of civil asset forfeiture here in Hawai’i is quaint. Last year’s audit reveals that there have been neither oversight nor rules in place to protect property owners from such abuse when it does occur. A conviction requirement would give police pause before going after low-hanging fruit, and it should be a bare minimum to uphold another notion, one eternal rather than quaint, due process.

In addition, even when there is a conviction, the forfeiture could be deemed “excessive” and in violation of the state and US Constitutions. Earlier this year, in Timbs v. Indiana, the unanimous US Supreme Court ruled in such a case that the fine had been unconstitutional. This portends poorly for state forfeiture laws, especially those that like in Hawai’i have had so little oversight/went unaudited for over two decades. To begin to right this injustice, we urge that the Governor Ige reconsider this ill-advised intent to veto HB748. Hawai’i should be proactive, protect basic rights and not wait until civil asset forfeiture is eliminated by the courts.”

If You Want Latest Updates On Various Topics Then Visit Our Website: https://dpfhi.org.